Folk music has long been a source of inspiration for composers. Many melodies of more than several hundred years of age have survived in part due to their incorporation in modern music, and also because they are tuneful and memorable. Much of my music for band thus far has been inspired by folksongs. I believe this is due at least in part to growing up with the band music of Percy Grainger, Gustav Holst, Ralph Vaughan Williams, Pierre LaPlante, and Clare Grundman, and also singing in two outstanding choral programs (New Hartford, New York’s Perry Junior High School Choir directed by Dr. Stephen Paparo, and Utica, New York’s Grace Church Choir directed by Mr. Larry Tremsky).

“Wild Mountain Thyme” is a Celtic folksong, and exists in several other adaptations including “The Braes of Balquhither,” and “Will Ye Go, Lassie, Go?” It has been set here for concert band to depict the beautiful purple flowers of the heather plant which cover much of the Scottish countryside during the late summer months. 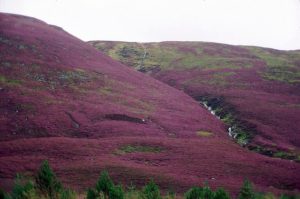 O the summer time has come
And the trees are sweetly blooming
And wild mountain thyme
Grows around the purple heather.
Will you go, lassie, go?

I will range through the wilds
And the deep land so dreary
And return with the spoils
To the bower o’ my dearie.
Will ye go lassie go ?

If my true love she’ll not come,
Then I’ll surely find another,
To pull wild mountain thyme,
All around the purple heather.
Will you go, lassie, go?

I first came across this tune when I was commissioned to write a piece for percussion by a friend and colleague, Kyle Spence. Kyle was on the band staff at Joe E. Newsome High School during my final year as Director of Bands. At the time he was working on a dual masters in conducting and percussion performance from the University of South Florida, and he wanted a new piece to premiere on his masters recital.

With almost no parameters for the commission, and a desire to develop my compositional chops for marimba due to a growing career as a pageantry arts designer, I settled on a piece for solo marimba. Kyle, who owns his own five-octave rosewood marimba which he somehow transports in his shoebox of a car, is a first generation Scottish American (though he doesn’t sound like it). I therefor decided to use Scottish folksongs as the basis of this new work. And so, SEVEN SONGS OF SCOTLAND was born. And no, the alliterative title wasn’t an accident. 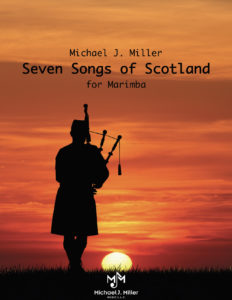 Cover of SEVEN SONGS OF SCOTLAND

I chose the following tunes for Kyle’s piece:

I was particularly drawn to “Wild Mountain Thyme” due to its tuneful melody. It is largely pentatonic, though the subdominant scale degree is used just once in the penultimate phrase which creates a wonderful resolution into the melody’s conclusion. Also, I find the recurring syncopation of the first two eighth-notes in the bar to be unique and catchy.

There is a ton of educational value in programming a piece such as PURPLE MOUNTAIN HEATHER, especially for younger musicians. It gives them the opportunity to learn music from different parts of the world, exposing them to other cultures and ways of life; it teaches them about people and places they might otherwise have never experienced; and it provides a chance for instrumentalists to develop their musicality through song.

PURPLE MOUNTAIN HEATHER begins with a twelve-measure introduction of harmonic suspensions and melodic fragments passed throughout the ensemble over a pulsing weak-beat pedal-point on the dominant scale degree. The key center here is E-flat major, one of the best keys for a concert band. The counterpoint created by the melodic fragments gets busier as the intro unfolds, culminating with a half-cadence and diminuendo into a vibraphone pedal-point on the dominant scale degree. 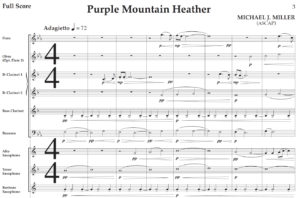 The tune is then heard in single phrases alternating between a solo flute and solo alto saxophone. A subtle chime sounds between each of these phrases, reminiscent of a far-off kirk bell (kirk is the Scottish word for church). At measure 25, the rhythm of the chime accelerates as the final melodic phrase is mimicked in a cascading motion throughout the ensemble. This resolves into the first full ensemble statement of the principal theme at measure 30.

Here, the 1st trumpet carries the theme with most of the doubling shared between the 1st and 2nd clarinets. This section utilizes a fair amount of counterpoint and shaping the hold the interest of the performers as well as audience members.

A dramatic modulation occurs during a ritardando in measures 40 and 41, arriving in the key of F major (another great key for band) at measure 42. Here, the 1st trumpet and clarinet share the principal theme which is harmonized by the 2nd clarinet and trumpet. The flute and oboe voices play a soaring descent, the alto saxophone and horn a counter-melody, and for a few bars, the bassoon, and euphonium the tune of “The Bonnie Banks O’ Loch Lomond.” 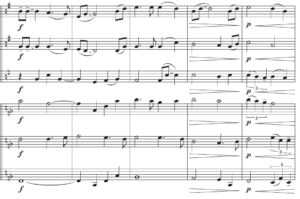 The piece comes to a climax at measure 48 at the end of a molto ritardando when the bass voices resolve down to a Bm7 chord. The next few measures (m. 50-54) augment the melody’s rhythm to accentuate the use of the aforementioned subdominant scale degree, and to resolve the previously created volume and harmonic tension.

As creative repetition generally makes for memorable music, Mmeasure 54 and 55 mimic measures 25-29, and measures 56-63 echo the introduction. The music is brought to a subtle close by solo trumpet harmonized with a plagal cadence.

You might be wondering, “why call it Purple Mountain Heather and not Wild Mountain Thyme or one of the other familiar titles of the folksong?” There is an adaptation of this tune by another composer (of a higher degree of difficulty) that goes by the name MOUNTAIN THYME. Plus, I like to think purple is universally appealing color.

Michael is a composer, conductor, and educator with a strong background in the pageantry arts. His music is modern, exciting, and full of dramatic effect and has quickly received recognition and performances around the world.