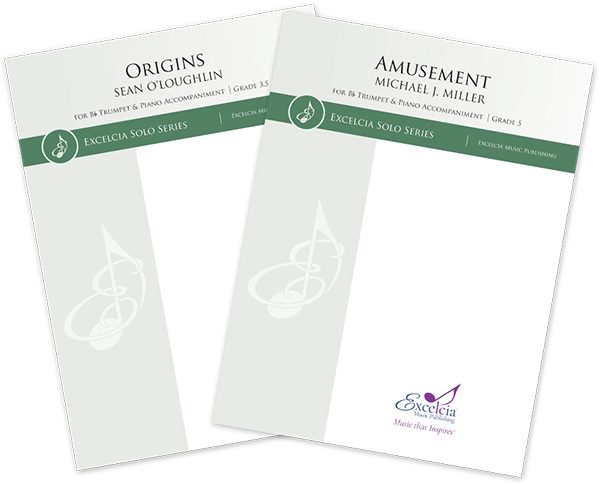 Lakeland, Florida (October 24, 2019)–  Excelcia Music Publishing launches new Excelcia Solo Series with two works for Trumpet and Piano by award-winning composers and trumpet players Sean O’Loughlin and Michael J. Miller.  Each bring with them a wealth of knowledge as performers and writers, adding their own unique voice to these challenging new solo works.

Excelcia Solo Series will feature new literature by well-known composers interested in adding a fresh voice to the standard solo repertoire.  The series is a unique opportunity to explore an expanded view of our composers’ writing styles and versatility. Each solo comes with a beautiful hardcover set and solo part, meticulously engraved and ready for performance at recitals or festival adjudication.

Amusement, by Michael J. Miller, is a technical showpiece for the advancing trumpet player originally scored for solo Trumpet with concert band accompaniment.  The piece was dedicated to Tim Nemzin and it showcases the whimsical side of the Trumpet.

The solos are available for $14.99 each, from music retailers everywhere.